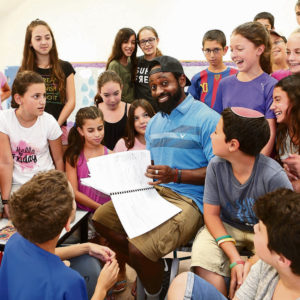 Jared Waters and students in Israel – Courtesy of Yediot Israel.

Talma is a summer English immersion program for Israeli elementary school children. The program brings together volunteer US based teachers and Israeli teachers who co-teach each class. Talma allows American teachers to experience Israel while providing English classes for children from low-income neighborhoods.

Jared found out about the program from Harlem Hebrew head of school, Lindsay Malanga, who encouraged him to join. After speaking with other teachers from the school who had also been a part of the program, he decided to join.

“I wanted to see what it would be like to teach in Israel, because at my school I work with an Israeli teacher,” Jared told Yediot news.

For Jared and other teachers from the Hebrew Public network who participate in the program, they have the unique advantage of being immersed in the culture that their school teaches.

However, Jared is no stranger to living in a foreign country or being immersed in different cultures. A self-proclaimed “war baby”, he was born in Missouri but grew up on a US military base in the Netherlands where his dad worked as a NATO colonel. His family has also lived in other countries such as, South Korea, Japan and Morocco.

“Every place we went to, I learned the culture and tried to assimilate, and that is what I am now doing, being in Israel,” Jared told Yediot news.

After just a year at Harlem Hebrew and with no prior experience with Hebrew, he is now learning and speaking Hebrew and shares how just a month after he started, his first graders – also new to the language – are able to converse with him in Hebrew. Jared also speaks Dutch and German.

Over the summer Jared taught 5th graders in Israel. While he finds it more challenging to teach 5th graders who are more mature and strong willed, he says the classroom experience in Israel isn’t very different from the team teaching model used at Harlem Hebrew to immerse students in the language. In fact, he shares that he is adjusting very well in Israel, using the same techniques there as he uses in his Harlem Hebrew classroom.

Prior to joining Harlem Hebrew, Jared spent four years as a kindergarten teacher in Tampa, Florida. But being the free spirit that he is, after years of feeling stuck in a routine, he got in his car and drove to New York.

“I moved here on complete faith and all the pieces just fell into place,” Jared shared in an earlier interview with Hebrew Public. He said on arriving in Harlem a year ago, within a day he found an apartment and within a week, he landed his position at Harlem Hebrew.

“I’m just trying to see the world while I can,” Jared shared. “But more importantly I enjoy seeing the future generation grow, with a little help from me on the way.”

Inside the Classroom: Q&A with Harlem Hebrew Teacher, Jared Waters Charlottesville – A Special Message from Our CEO Jon Rosenberg
Scroll to top